In the summer of 2009 the Prinzessinnengärten was established at Moritzplatz in Berlin Kreuzberg. The site had been a wasteland for over half a century. Today the site is run by a non-profit company, ”Nomadisch Grün”, that has leased the site from the state of Berlin in order to create a mobile urban farm. The garden was created by the initiators and local residents themselves in order to produce fresh organic, locally produced herbs and vegetables. All cultivation is conducted in raised compost beds (boxes) without the use of pesticides and artificial fertilisers. The garden is also running a café where city residents can eat organically grown food that originate from the garden and also buy fresh vegetables, herbs and spices. Prinzessinnengärten also hosts a range of cultural activities such as concerts, art exhibitions as well as workshops dealing with questions of local subsistence, urban development, and social integration.

The garden as a public learning arena

Prinzessinnengarten is a public access garden (PAC-garden), which means that it is open for anyone in the public to conduct gardening. It is extensively frequented by visitors from the public, as well as by volunteers. Volunteers can work in the garden in exchange of buying cultivars at a reduced prize in the café. An important aspect of the garden is to serve as a platform for mutual learning, where locals can come together to experiment and discover more about organic food production, biodiversity and climate change mitigation and adaptation. In this way the garden provides an urban learning arena for healthy eating, sustainable living and a future-oriented urban lifestyles. Nomadisch Grün also has the aim to increase biological, social and cultural diversity in the neighbourhood and pioneer a new way of living together in the city. With its wide variety of competencies and learning streams Prinzessinnengärten helps promoting a sense of community in the area of Berlin Kreuzberg.

GARDEN ON THE TRACK

In late 2011, the City of Stockholm, gave permission to the establishment for a mobile , temporary and non-profit-driven garden association on the track area at Eriksdal in central Stockholm. The assoaction calls itself Garden on the Track. It is located on a parcel of land that is owned by the City of Stockholm. The garden is a private initiative with the purpose to carry out a mobile organic garden where members can cultivate themselves, and to spread knowledge about food cultivation and ecology. Another purpose is to develop a sustainable future strategic plan for the area where the garden is located. It therefore takes particular account of the identity of the historic track as a central element in the garden's architecture and heritage. The association cooperates with the city of Stockholm, private companies and and other organizations.

The garden sees itself representing a different form of park developed, constructed, and operated to a large extent by ordinary city-inhabitants. It is a public access garden (PAC-garden), which means that it is open for anyone in the public to participate in gardening from April to October. Gardeners pay a low annual membership fee to become members in the assocation and they meet several times a week. Garden on the Track is also partly financed by persons or companies that may adopt and sponsor one or more of the cultivation boxes that the garden is built around. The association also sells vegetables and spices that have been grown on the track.

The garden as a meeting place and learning environment

Garden on the Track was much inspired by two successful examples of urban gardens: Prinzessinnengarten in Kreuzberg, Berlin, and the High Line in Manhattan, New York - two green oases that break with the city's pace. Both were created by private initiatives. Both attract people from the local neighborhood as well as from other parts of the city and around the world. Besides having the pedagogical purpose to support ecological conditions in the city, both hold social functions through strengthening local neighborhoods and connecting them to other neighborhoods.

Garden on the Track started with the pedagogical pretext for city people that have no or little experience of farming to learn about gardening.  The garden is therefore a ”growing school” where learning takes place by way of learning by doing. Experienced members of the association share their knowledge with those that are more inexperienced in farming. But knowledge is also aquired through direct experience of digging into the soil and facing all the potential all-year stages and processes in gardening of flowers and vegetables. The garden has the ambition to make it as easy as possible to get started with plantation and gardening at home, serving as a place where people get both the knowledge and materials needed for city cultivation in the balcony, roofs or windowsills.

A special project called the "Children's Garden at the Track"  is devoted to working with schools and kindergartens in the local neigborhood. Garden on the track is also open to different kinds of cultural activities, including heritage walks, puppet shows, gourmet dinner, concerts and musical events, movie game entries and photo shootings. It is already a starting point for various cultural activities and visited by people of different age groups and backgrounds from all over Stockholm. http://pasparet.org/

In Folkodlarna i Skarpnäck the key theme is spreading knowledge about organic food cultivation and gardening and producing locally produced foods. The association consists of 20 active members that started cultivating foods in the allotment area known as Skarpnäcks Fritidsträdgårdar in 2009. Gardening on allotment areas is usually a very stable property right in Sweden with lease rights of duration of 25 years or more (Colding et al. 2013). In conjunction to that the city district planned to rebuild a local park in Skarpnäck (Indianparken), the association also received permission in June 2011 to start cultivating food in the park. A common thread among members is the dire need to change consumption preferences and behaviors and providing coming generations with a meaningful alternative to shopping.

The Kärrtorp Guerilla Gardening is an example where gardening takes place in the absence of any legally defined property rights, such as on abandoned sites, an area that is not being cared for, or on property owned by someone else like parkland in the local municipality. Guerilla Gardening encompasses gardeners who spill over their legal borders to gardeners with political influences who seek to achieve change by using guerrilla gardening as a form of direct action. It has implications for land rights and property reforms; aiming to highlight land ownership issues to provide a new purpose for land or reclaim land that is perceived to be in neglect or misused. Guerilla gardening draws on the first community gardens that was established in United States in New York City in the early 1970s. http://www.folkodlarna.se/

Guerrilla gardening is the cultivation of trees, flowers and vegetables on land that the gardeners do not have the legal rights to use, such as abandoned land, wasteland, park land and industrial sites. The term guerrilla gardening was first coined by Liz Christy and her http://en.wikipedia.org/wiki/Liz_Christy_Garden \o "Liz Christy Garden" Green Guerrilla group in 1973 in the Bowery Houston area of New York. They transformed a vacant lot into a garden by throwing balloons filled with seeds and bulbs over the fence of the lot until the group finally received permission from the city of New York to conduct gardening.

The key theme of Bushgraben - Gerhard Borné is centered on how a garden and food cultivation site could be developed around religious pretexts, where spiritual values and beliefs about nature form the basis for management. This garden is located in a villa neighborhood and initiated and run by a priest. The garden and its food cultivation activities also serve the purpose to be restorative for persons that are mentally fatigue or disabled. In this sense the garden fits the category of representing a biophila garden. There is a whole cadre of community gardens around the world, especially in the U.S., that is grounded in the notion of biophilia, which means that there is an instinctive bond between human beings and other living systems. Biologists Edward O. Wilson introduced and popularized the Biophilia concept in his book, Biophilia (1984). See more on: http://www.ecologyandsociety.org/vol17/iss2/art5/ 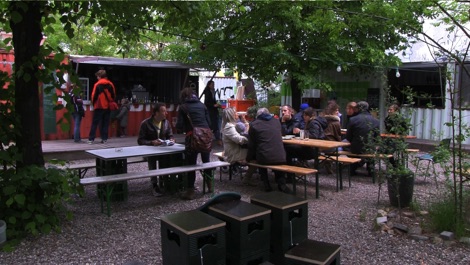 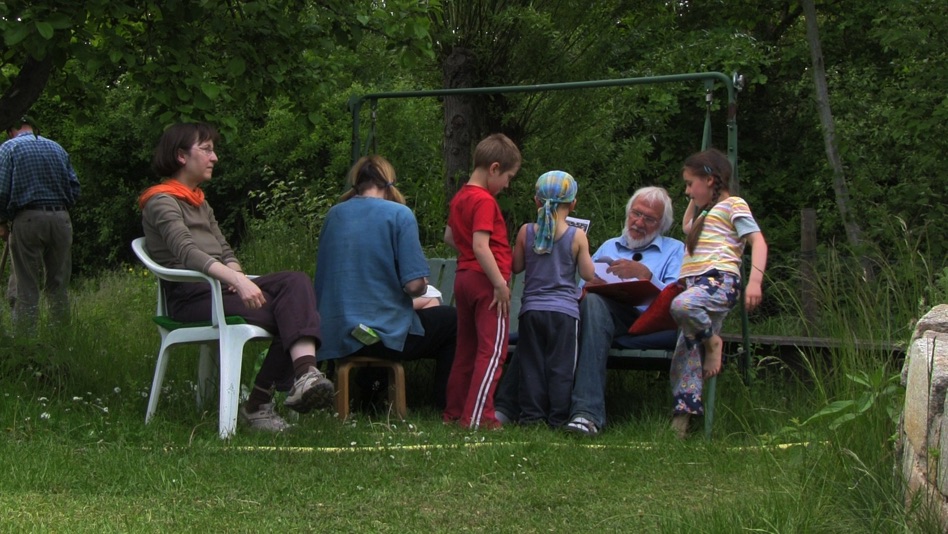 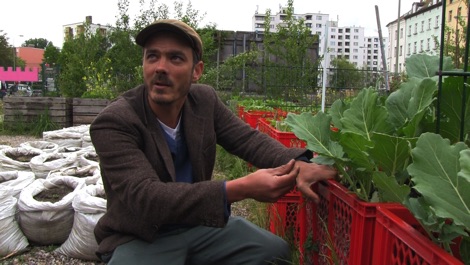 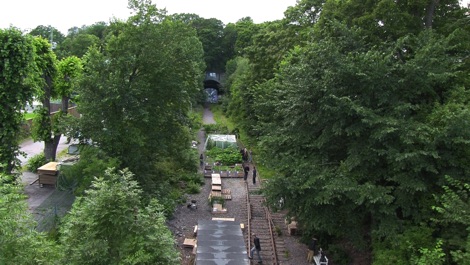 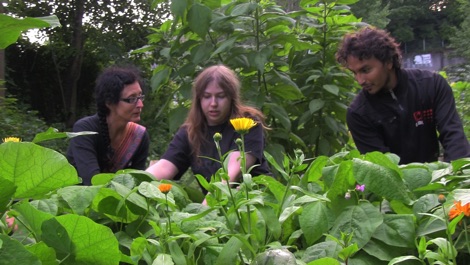 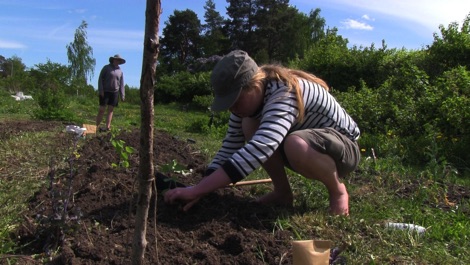 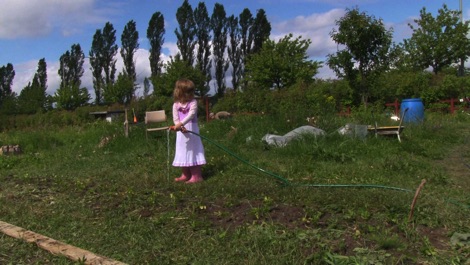 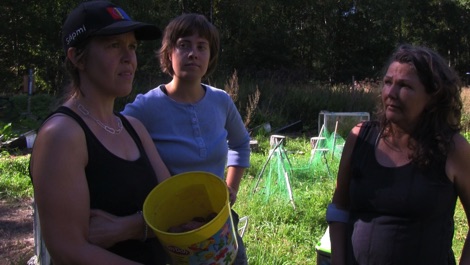 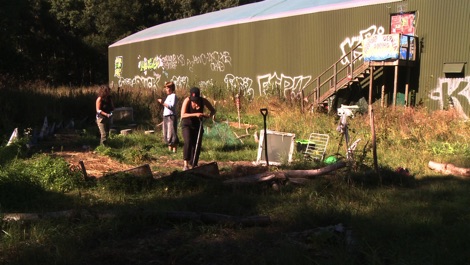